Most of the times we create custom designed journeys for our clients but sometimes a guided tour can be a great option, especially if you are a solo traveler, would like to meet likeminded folks and share the travel experience with them or just want to have a carefree experience, where everything is taken care of for you. 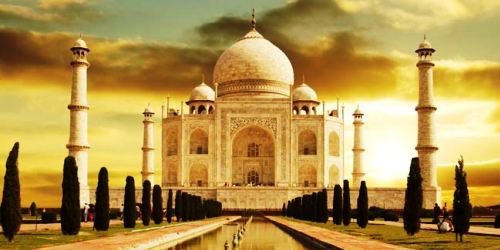 One of my favorite tour operators for guided luxury tours is Travcoa. What I like most is that the group size is kept small, which makes for an in-depths travel experience and time to discover some places on your own if you choose to do so.

Here is an itinerary I find especially fascinating and perfect for an organized adventure.
It’s Travcoa’s 23 days “Enlightened India” tour.

Arrive in New Delhi, a magical fusion of ancient and modern cultures, in the late evening of Day 2. In New Delhi visit the landmark Qutub Minar tower, Parliament House, and the official residence of the President of India. Reflecting the city’s Mughal past, Old New Delhi takes you through the labyrinthine streets passing by elaborate mosques, majestic monuments and colorful bazaars. Visits include the 17th-century Red Fort, India’s largest mosque, Mahatma Gandhi’s Memorial and the National Museum.
Taj Mahal Hotel, New Delhi 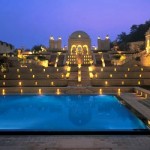 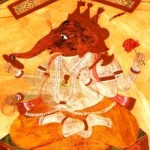 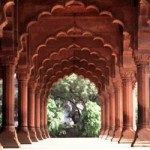 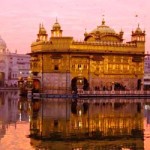 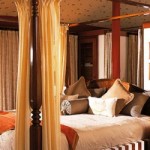 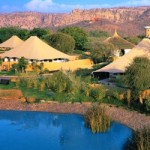 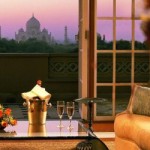 Explore Varanasi, one of the oldest living cities in the world. Varanasi is known for being the site where Buddha preached his very first sermon. The holiest of all the Indian rivers, the Ganges, flows through here, and you will witness the sacred cleansing rituals of thousands of pilgrims on the west bank of the river.
Taj Ganges, Varanasi

Experience an early morning Varanasi boat cruise on the Ganges and witness the rituals performed on the banks of this sacred river. In Khajuraho, you will visit the Eastern and Western Group of Temples, including the Ghantai Temple; the Vamana Temple, dedicated to the “Vamana,” or dwarf incarnation of Lord Vishnu; and the Javari Temple. There are also three Jain Temples here, featuring beautiful carvings and sculptures of Vaishnav deities. In the evening, enjoy a sound and light show.
Taj Chandela, Khajuraho 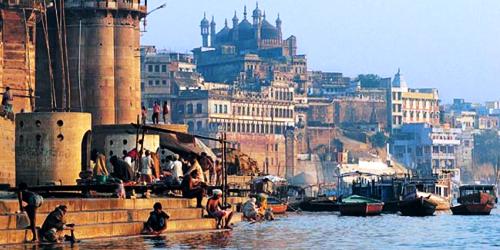 Travel by road to Orchha, a well-preserved medieval city with palaces and temples built by the Bundela Rulers in the 16th and 17th centuries. A highlight will be Jahangir Mahal, a tiered palace crowned by graceful Chhatris, which commands a spectacular view of soaring temple spires and cenotaphs. Later, board the Shatabdi Express to Agra.

Agra’s renowned Taj Mahal is the ultimate requiem to love. This perfectly proportioned masterpiece in white marble was built by 20,000 craftsmen from all over Asia and Europe and took 17 years to complete. Experience the Taj Mahal at sunrise and sunset from your room.

In the morning drive to Fatehpur Sikri. This magnificent fortified city was the capital of the Mughal Empire between 1571 and 1585. You will see the Halls of Public and Private Audiences, the Tower of Victory, and the Tomb of Salim Christi, which is laced with mother-of-pearl. Continue driving to Bharatpur and the rail station for your train to Sawai Madhopur, near to Ranthambhore, which is hailed as one of India’s finest wildlife destinations.

Ranthambhore National Park derives its name from an 11th-century fort, of which the remnants of summer palaces and temples still stand. It is famous for its elusive tigers and is a favorite with photographers. Tigers may be spotted during the day while stalking, hunting, or taking care of their young. On Day 11 you will have morning and afternoon game drives. The park has a rich diversity of flora and fauna. In addition to the tiger, other predators found in the park include leopards, striped hyenas, jackals, caracals, jungle cats and more. 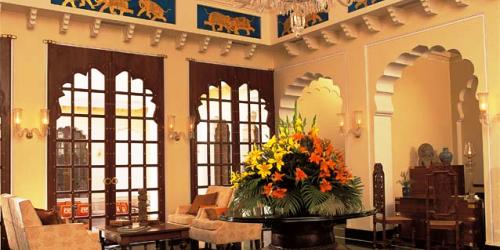 Continue by road to the famed “Pink City” of Jaipur — universally renowned for its beautiful palaces and buildings — and enjoy a visit to the spectacular Amber Fort. A highlight of your stay in Jaipur is an elephant safari conducted in the natural and serene area surrounding the camp of Dera Amer. After a welcome drink and feeding the elephants, guests are seated with a maximum of two per elephant and sent on a picturesque track following a local tribal guide passing by village hutments, fields, medieval fortress (lit by mashals at night) and monuments. Finally, arrive at the camp situated in the middle of the forest to a grand welcome and private dinner.
The Rambagh Palace or Oberoi Rajvilas, Jaipur

One of the most romantic cities in the world, Udaipur is known as “the Venice of the East”. Visit the City Palace built on the banks of Lake Pichola, a complex of palatial splendor that blends Rajput and Mughal influences. Stroll around Shaelion-ki Bari, an ornamental pleasure garden designed for the ladies of the palace in the 18th century, with beautiful fountains, trees and flowers. Enjoy an evening cocktail cruise on Lake Pichola.
Taj Lake Palace or Oberoi Udaivilas, Udaipur 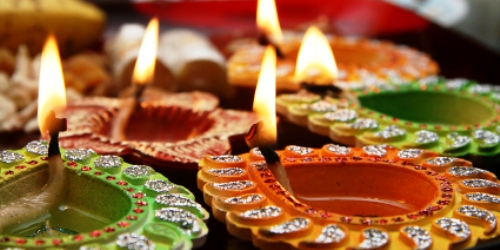 Once a sultry archipelago of seven islands, today Mumbai is an exciting metropolis that blends the old and the new. Take a cruise to Elephanta Island across the harbor. Inside the island’s caves are fascinating sculptures of various gods of Hindu mythology.

In the afternoon, take a tour of Mumbai city, a rich blend of east and west. You will see the landmark “Gateway of India,” the Hanging Gardens of Kamla Nehru Park and the Mani Bhawan house where Mahatma Gandhi used to stay.

Known as the “Queen of the Arabian Sea,” the Cochin harbor was once a major center of trade and commerce for the Arabs, Chinese, Portuguese, Dutch and British — all cultures which have left their mark on these beautiful islands. Highlights today will include a tour of Fort Cochin and a private dinner and special presentation of Kathakali — a dramatic mask dance, one of the four major classical schools of Indian cultural dance.
Taj Malabar, Cochin 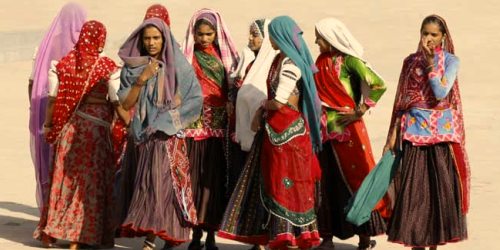 Take a city tour of Cochin, visiting St. Francis Church and the Mattancherry or “Dutch” Palace. The central hall of the Dutch Palace was the coronation hall of the rajas of Cochin. Rooms in the palace feature artwork depicting Hindu legends and gods. Then spend a few leisurely days in Kumarakom. Situated on the banks of the renowned Vembanad Lake, it is famous for being one of the finest watery destinations in the state.
Taj Garden Retreat, Kumarakom

Embark on your kettuvallam (houseboat) and cruise through the back waters of Kerala to Toddapully and then drive to Kovalam, one of India’s most popular beaches. Enjoy leisure time to explore and take advantage of independent activities such as an Indian aromatherapy treatment at the hotel’s excellent spa. On Day 23 transfer to the Trivandrum Airport for your return flight home or onto your next destination.
Taj Green Cove, Kovalam 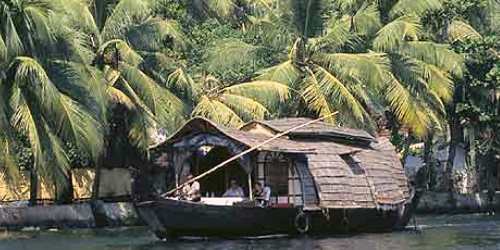 I hope you find this itinerary as inspiring and exciting as I do. It’s a part of the world that is less traveled yet because of India’s rich culture and fascinating history, it has so much to offer to the discerning traveler.

There are numerous other options and if 23 days is to long for you, itineraries 14 and 18 days in duration are available.
Please contact me for more information on these or any other unique, guided tours throughout the world.

May all your travels stir your soul and change your life forever – Ales.

Sign-up for a FREE copy of JOTS
"Top 10 Life-Changing
Travel Destinations!"
(...and our fabulous newsletter too)

I wonder if there is a site that we can nominate best travel agents? If so, we will be sure to vote you and your company as number one! Our trip was absolutely amazing. Each place was unique and had so much to offer. The travel was planned out perfectly and we especially enjoyed and were impressed with all of the guides. We were very well taken care of at all stops. The Patara Elephant Farm was a rare and wonderful highlight for us both. Truth be told, we didn’t do much planning/reading before we left and just let each day unfold as you planned it, so at the elephant farm we weren’t exactly sure what to expect but enjoyed every minute.

Need a hand planning your next
adventure? Contact us for
a Free Consultation!